“I have been fortunate to take up music full-time and do exactly what I wanted to do, which was performing and putting out my own music… right after I graduated from Metalworks, my career sort of took off.”

Shortly after graduating, Abby V launched his YouTube channel to coincide with the release of his debut album “First of All” and he already has over 100,000 subscribers, due in part to his viral hit “73 Ragas with Abby V”. In this viral video, which has over 600,000 views, Abby V sings 73 ragas in Hindustani and Carnatic back-to-back, live and on-the-spot. Since then, Abby V has continued to release new content and grow his audience. Like so many artists, Abby V had to cancel his planned tour due to the pandemic, but he has made the most of his time in isolation by using social media to collaborate with established artists from around the world, including Sivaangi Krishnakumar, Antara Nandy, and Rasika Shekar, just to name a few. His unique sound combines a variety of genres including Pop, R&B, Soul, Indian (Bollywood, Tamil, Carnatic and Hindustani Classical, Ghazal), Folk, and Western Classical.

With a career on the rise and new music on the way, we decided to catch up with Abby V in our latest alumni interview.

What do you think has been the most helpful aspect of your Metalworks education?

"I was waiting for you to ask me this question because I don't know where to begin. I think, when people talk about transformational experiences and journeys, this is definitely it for me… this was a turning point in my life that helped me become what I am and shaped what I am doing (I think forever) in my career. When I came into the program, I had already been to university, so I had an experience of higher education … the student environment and professors and instructors, and all that stuff. But at Metalworks, I wanted to be there …the entire two years, it was such a phenomenal experience. Every single instructor [and] every single course just made so much sense… there was so much reasoning behind how it was laid out. And you know, [we learned about] some things that I didn't even acknowledge [before]. For instance, courses like studio etiquette…and [Music], Arts & Culture, what a phenomenal course that was; we learned about music from the beginning of time, and it's just amazing, not just in terms of what I do, but also how I conduct myself when I speak to someone - I'm more aware of music and different styles of music and all that stuff.

And I think what was the most helpful for me, undoubtedly, was the technology aspect of it because I came into the program clueless … I didn't even know to record myself online or anything. I just knew how to record it on the phone and that's obviously not enough… so I had no idea, and I learned every single thing from the very beginning at Metalworks. I remember in the first half of the [Digital Music Production] course, we had a Pro Tools certification and I studied so hard for it and I got the certification. And I think that was phenomenal, that I could go from knowing absolutely nothing to, in a few months, being a certified Pro Tools user. I think it just speaks volumes about how well the courses are designed and how well the instructors taught the courses. I am so, so comfortable. I can't tell you, in recording myself, editing, comping, especially during a time like this (the pandemic), where I can't even rent out a studio, I can't meet other people in person. So, so much of it is remote. I think that my time at Metalworks was training for all of us - it was very transformational."

Do you have any words of wisdom for current students at Metalworks?

“Try to just absorb as much in as you can [and] be present because this time of learning, if you approach it with the right attitude, is very blissful. I think that's one of the things that really helped me learn very quickly. I tried to be as present as I could [and] I got a good night of rest before I went to every class and that helped. I took the time to understand the concepts and not just work for the grades and to pass or whatever, because I knew that every single course is designed with a lot of intent and deliberation. So there's a reason why a course is there.

[For example] there's a reason why we perform different styles of music….I remember some of my peers would be very against singing certain styles of music because they'd say, “You know what, this is not my thing and I don't understand why I need to do it.” And sometimes I felt that way as well, but looking back now I think that was such a great experience because I understand, for instance, country music. We spent a long time on country music, and for a lot of us, you know, country music, wasn't really our main thing, but the lessons that we learned from country music were so great because the way that they process vocals [in country music], no other style music does it that way… so there's always stuff to learn from every style and every course. So, I would just say absorb as much as you can and be as present as possible because it's really going to go a long way."

It’s always inspiring to see a Metalworks Institute graduate pursuing their creative ambitions and it’s fantastic to see Abby V doing so well in his career. Be sure to listen to Abby V’s music and keep up with him on social media! 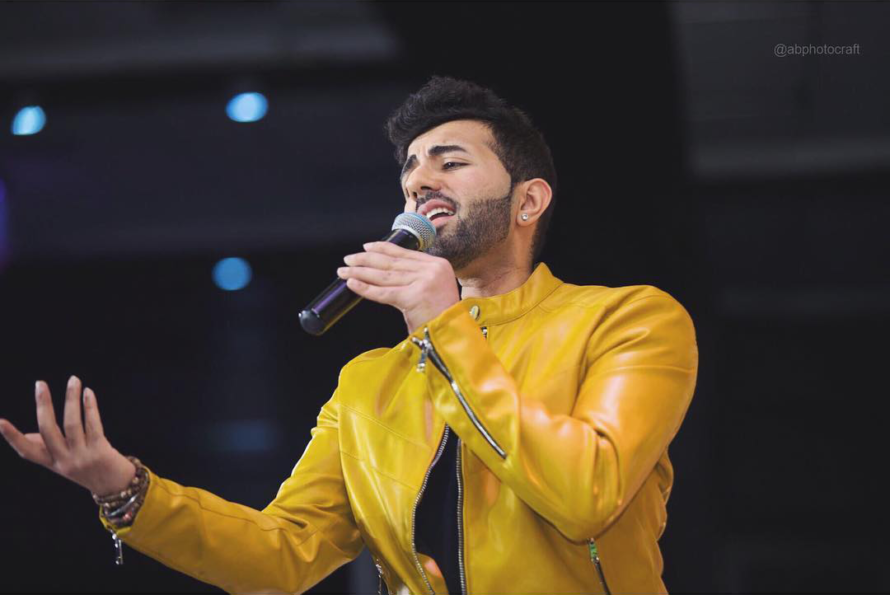