Metalworks Institute’s Audio Production and Engineering Program graduates, Jeff ‘Grimm’ Crake and Rainer Miller-Blanchaer are the musical duo Rainer + Grimm. This summer the pair have set out on their Feel Something Tour throughout North America with shows booked in Los Angeles, San Francisco, Chicago, Kansas City, New York City and Southhampton. The two have become well known for their choice remixes and consistent production, with over thirteen thousand followers on Sound Cloud. Their remix of Sam Smith’s Stay With Me currently sits with over four million plays and their remix of Golden Coast’s Break My Fall sits with over two million plays. Be sure to check out their most recent remix of Majid Jordan ft. Drake’s My Love on SoundCloud

In addition to creating various remixes and compilations, Rainer has produced tracks with R&B artist The Weeknd and Rainer + Grimm have worked on Grammy Award winning music with Toronto’s own Drake. Jeff ‘Grimm’ Crake was recognized for his participation as Assistant Engineer on the JUNO and GRAMMY Award-Nominated recording Nothing Was The Same by Drake. 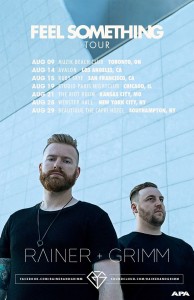