Madisson Luhowy returned to her home in Manitoba shortly after graduating from the Professional Sound (Audio Specialist) Program at Metalworks, intent on putting the knowledge and skills she gained at Metalworks to good use in the world of live sound.

Madisson secured a position with Sound Art, a live sound production company based out of Winnipeg and Calgary. Sound Art has provided audio production equipment for a wide array of events throughout western Canada, as well as facilities like Winnipeg’s MTS Centre (home of the Jets), the Centennial Concert Hall in Winnipeg, and Calgary’s Jubilee Auditorium.

Over the past three years, Madisson has experienced different roles with Sound Art, including Front of House Engineer, Monitor Engineer, System Tech and Stage Tech. In any of those given roles, she works on a variety of shows, from corporate events to large summer festivals. She’s been able to work with an impressive list of artists, including Wu-Tang Clan, TI, Tyler the Creator, Our Lady Peace, Brett Kissell, Dean Brody, The Roadhammers, Blue Rodeo, Billy Ray Cyrus, and Chris Jansen, to name but a few.

“On top of my role at Sound Art, I continue to do freelance work,” says Madisson, “mixing at local venues and, more recently, mixing and travelling with a local band, The Mariachi Ghost.”

Madisson already has a long list of personal career highlights since graduating Metalworks: hanging line array at an arena level; putting together and system tech-ing a PA system for an audience of 3,000 (at a show featuring The Sheepdogs, The Trews, Dallas Smith and Aaron Pritchett); working as a monitor engineer at the Dauphin CountryFest (one of the largest in Canada), as well as at the live television broadcasts of Aboriginal Day Live and the 2015 Indigenous Music Awards; and Front of House engineering the live broadcast of the Winnipeg Comedy Festival Gala Series. 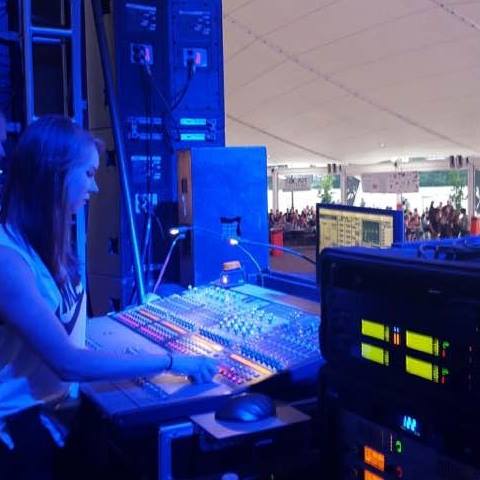