Julian Troiano graduated with honours from the two year Music Performance and Technology – Vocal Major Program in December of 2013. Since graduating he has released his first EP “Inner Battles” and is gearing up for his second EP Release Party taking place Wednesday April 30th at The Orbit Room in Toronto.

In preparation for the release of his EP, Julian recorded three live performances at Metalworks Studios. Two of the performances; “Mraz in her Headphones” and “Inner Battles” were just released in March of 2014. “At 23 Troiano has a vast amount of musical knowledge and experience. In addition to learning from his uncle Domenic, Troiano began singing in his church choir at a young age…  Julian draws on a variety of musical influences such as Stevie Wonder, Elton John, Jason Mraz and Donny Hathaway…”

At our graduation ceremony on January 25th 2014, Julian was the recipient of a Mentorship Award with Rik Emmett (Guitarist of the Year at the Canadian Smooth Jazz Awards, Educator and vocalist/guitarist for Canadian Rock Band Triumph). Julian also received the Tom Cochrane and Takamine Guitar Award for Outstanding Promise as a Songwriter.


Facebook: facebook.com/jutroiano
Get your own copy of Inner Battles on iTunes! 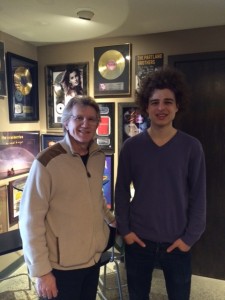