GRAMMY-Award winning Toronto rapper Drake announced that he would be putting together a project to build a recording studio in Strawberry Mansion High School in Philadelphia.

It was in 2012 that Drake saw a television special on ABC, a part of Diane Sawyer’s “Hidden America” series. Strawberry Mansion High School had been on America’s Most Persistently Dangerous Schools list for six years running. Knife fights, fist fights, poverty and hopelessness hung in the halls until a lady named Linda Cliatt-Wayman decided to dedicate herself to making a difference as principle of the school. With her perseverance, several positive transformations have been made and with the help of Drake, a fully functional recording studio has been built to discourage illegal activity and violence at Strawberry Mansion.

The idea to involve Metalworks Institute graduates was presented to Metalworks Founder Gil Moore by award winning Alumnus Noel Cadastre (Drake, Lil Wayne, A$AP Rocky, Nicki Minaj) and Drex Jancar the Co-Founder and CFO of The Remix Project, a foundation “created in order to help level the playing field for young people from disadvantaged, marginalized and underserved communities.” When asked about the project Gil Moore said “I could see this as a phenomenal idea and knew our graduates could make a difference, so we jumped in”.

Noel and Drex selected Metalworks Institute graduate Travis Sewchan (2010), to be the head of the project on the ground in Philadelphia. Shortly after graduating, Travis followed in fellow graduate Noel Cadastre’s footsteps and set the ball rolling towards a permanent career with OVO where he is currently an assistant engineer. Travis has credits on Drake’s GRAMMY-Award winning album “Take Care” as well as his album “Hold On We’re Going Home” and latest album “Nothing Was The Same” which was recorded at Metalworks Studios.

Alongside recent 2014 Audio Production and Engineering graduates Jason Young, Maxim Korolkevich, Brad Doucette, Sean Dowell, Reuben Bakker and Dylan Boyer, Travis and his team set out to Philadelphia to construct the brand new studio space including complete acoustic treatments as well as the technical setup of a brand new audio lab. Some were not prepared for what they would experience.

“We didn’t expect it to be as bad as it was,” said graduate Sean Dowell, “It was like in the movies, the level of disparity these kids are facing. They literally had nothing, I can’t describe it.”

The graduates were recognized for their purpose in being there and received a very warm and supportive welcome from the student body. The response from principle Cliatt-Wayman and her staff was equally if not more so welcoming.

“They were the nicest people you could ever want to meet,” said Jason Young, “They were so passionate about the students and the community.”

Drake’s aim by building the studio at the high school was to provide hope and motivation for the students to be able to follow their dreams and to encourage a creative outlet. The team of Metalworks Alumni had a front row seat to the first occurrence created by this provision at the end of their week in Philadelphia.

“We met a 17 year-old student from Strawberry Mansion and he had just got out of prison,” said Jason Young. “He came in to do a test run of the mics and this student was simply overjoyed. Just seeing him come out of the booth happy, that made the whole trip.”

For the Metalworks graduates it was not just an opportunity to put their various and intricate skills to good use, it was a first-hand look at the incredible things people in the music industry can do when united by a common cause. “The last day was one of the most heart-warming things I have ever seen,” said Maxim Korolkevich “[That week] I was able to see just how much people in the industry care.” 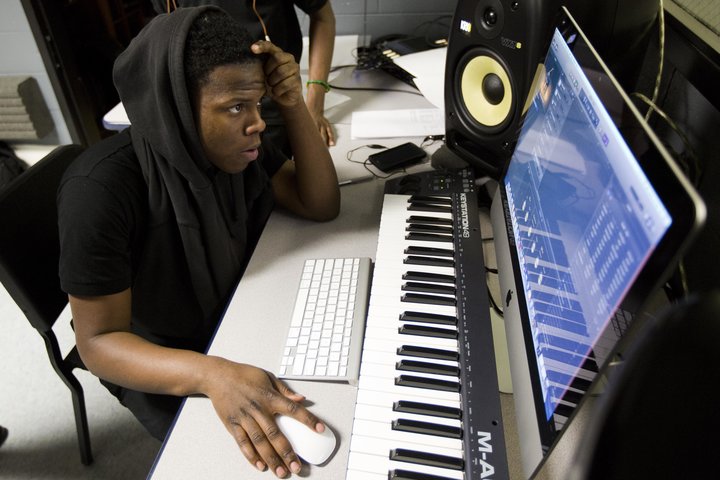