Francesco Giuliano, a graduate of the Music Performance & Technology (Bass Guitar Major) Diploma Program, is the co-founder of SounDrive Records – Brampton’s first indie record label. Over the past three years, SounDrive Records has been focused on developing local Canadian talent and their growing roster now includes artists Melle Rose and Words Like Wildfire.

In September 2017, SounDrive Records launched their official DRIVEWIRE live music showcases. Produced in partnership with The Rose Theatre and the City of Brampton, the DRIVEWIRE showcases provide various artists with another great opportunity to perform their original music throughout the Greater Toronto Area. The next DRIVEWIRE event is being sponsored by Canadian Beats and will feature performances from Courage My Love, Arcane Ghosts, and Words Like Wildfire. The show will take place at The Rose Theatre on December 20th and tickets are available here.

Francesco spoke to us a bit about SounDrive’s approach, telling us,

“SDR focuses on artist development, recording/production, marketing and promotion while building a sustainable foundation for music fans and creators within the city of Brampton. Every artist’s needs are slightly different so we take a full custom approach for each artist we work with and we hold the umbrella that handles the back end for any artist so they can focus on what an artist does…to create.”

We then asked Francesco, ‘What has been the most helpful aspect of your Metalworks education?’ and this is what he had to say:

“Two words. Work Ethic. Metalworks touches on a little bit of every aspect of the industry and whether you choose to be an engineer, producer, songwriter, manager or anything in between it comes down to how you utilize the information, resources and people provided.”

He then shared some advice for current students:

“Keep on going and never look back. Some choices may seem like the best idea in the world at the time and they may end up being one of your worst. There’s nothing you can do but keep on trying and growing. If you’re not failing that means you are not trying hard enough to push the boundaries and grow from point A to B”

In closing, Francesco gave a shoutout to all of SounDrive’s supporters:

“It’s been about 3.5 years since SounDrive Records became a registered business. We wouldn’t have been able to get where we are at this point without the several friends and our team (who we consider to be family at this point) supporting and working together to achieve the same goals. No matter what industry you’re in you will always be in the people business. So, I thank every single person and organization who has supported us in the past and continues to. We love you all.”

Be sure to check out SounDrive’s website and #DRIVEYOURSOUND on social media. 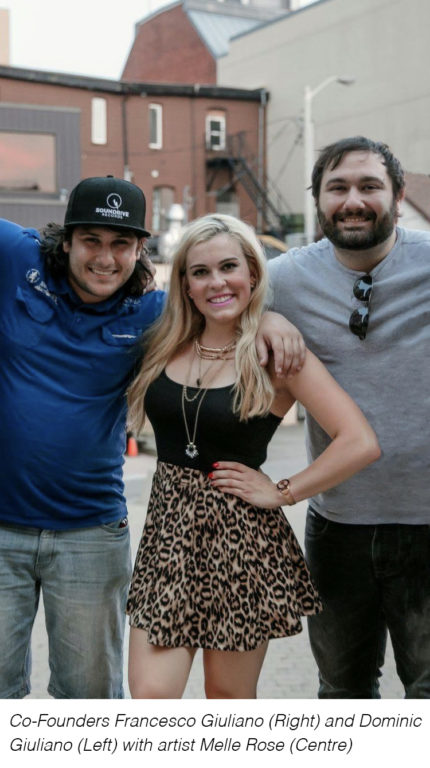