Wayne studied music in university, and was still unsure of what he wanted to do with his career after graduating. Believing strongly that his music education would give him a leg up in the recording field, Wayne spent a few months working to earn some money before enrolling in the Audio Production & Engineering Program. As Wayne himself noted in his review of the program, he “hasn’t stopped learning since.”

During his time at the Institute, Wayne was taught by the talented core of audio instructors, including Alf Annibalini, Graham Brewer and Mike Jones, each of whom was “always willing to spend a few extra minutes to make sure I understood signal flow and mic technique,” says Wayne.

After finishing our Audio Production & Engineering Program, Wayne immediately sought an internship position at various studios through the greater Toronto area. In the end, like many of his instructors, Wayne was fortunate enough to land an internship at Metalworks Studios. With a considerable amount of hard work under his belt, Wayne is now an assistant engineer at Metalworks Studios, sometimes even filling the role of main engineer, depending on the project.

Thus far, during his relatively young career at Metalworks Studios, Wayne has worked on recording sessions with the likes of Metric, the Barenaked Ladies, Divine Brown with Nelly Furtado, Protest the Hero, Die Mannequin, Matt Pakora with Timbaland, and The Midway State, among many others.

“I continue to learn my trade everyday,” notes Wayne, “because it is essential in making a name for one’s self in any career.” 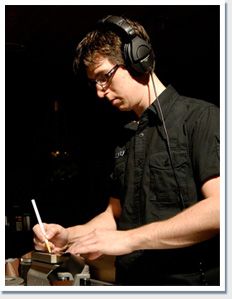