Roy Vargas graduated from the Audio Production & Engineering Program in 2007. His time in attendance at the Institute was only the first step in a successful career that is rapidly unfolding.

During his 3rd term, Vargas secured a position in the field as a commercial Sound Designer and Songwriter for Walmart. His work for Walmart consisted of creating sound effects and writing songs for advertisements, an experience that later led to another corporate opportunity as a composer for advertisements at the pharmaceutical company AstraZeneca.

Immediately after graduating, he put his acquired technical skills to use as a consultant for studios and post-production facilities. He also offered general Pro Tools consultations. Shortly after he begun consulting, he started his own audio production business, Sygnal to Noiz. Along with consulting services, Sygnal to Noiz offers engineering and production services to Toronto independent artists.

Vargas explained in his review of the Audio Production & Engineering Program that he could not have started his business successfully without his education. Although he took courses such as Recording Engineering Theory and Audio Post-Production, he affirmed that “it wasn’t just all technical, there were a few sides of the business brought in, which I have had to come across and deal with, especially with contracts and royalties.”

In 2009, his knowledge of audio got him into the film industry, as he started working on documentaries. His first film credit was “Life in Stages”, a documentary about the acclaimed Broadway producer Des Mcanuff (Jersey Boys, Who’s Tommy, Romeo & Juliet) that later aired on CTV Bravo. Vargas was the Dialogue Editor for the project, which involved synchronizing, reviewing, and editing using Automated Dialogue Replacement techniques.

He has also worked as the Sound Designer and Dialog Editor for a theatrical film titled “Bearing Up”, a documentary on the late Annie Smith, an inspiring cancer victim who has propagated awareness and founded support organizations to fight the disease. This film is now three years in the making and is at the post-production stage.

His current day job is composing music and sound designing for Webkinz – an online massive multimedia gaming community with over 20 million users. His job involves everything from writing new music to recording, editing and mixing. “Everything I did in school, I do during the day.”

Vargas’ current projects include composing and sound designing in L.A. for a movie called “Sacrifice”. The film features Oscar-winning actor Cuba Gooding Jr. and Christian Slater. He is also working with some high profile Canadian recording artists and plans to step into the world of big gaming titles. 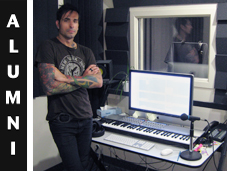