Noel Cadastre graduated from the one-year Audio Production and Engineering Program in 2006, and has been with the company since.

After attending the program himself, he says he believes in what Metalworks stands for and wants to set his roots in the place. “I think I’ve made a significant contribution to the company, from where we were to where we are now. I want to stick around and see how it goes.” said Cadastre.

Post-graduation, Cadastre became our Operations Manager. In this position, he was responsible for all of the Institute’s studio technology, including computers, Pro Tools hardware and software and IT support.

He spoke highly of the school in his review and said, “The foundation I received, from my education at Metalworks, laid the groundwork for dealing with the diverse range of technical and logistical responsibilities I assumed.” When the company expanded and needed IT support, Cadastre was happy to lend his expertise there too. What began as a one week IT project has now become a full-blown IT Manager role, for all three Metalworks companies.

The role, as you can imagine, comes with its challenges. Since it’s a “support” oriented role, Cadastre says, “no one ever calls you with good news.” While that can be stressful, it is also what he enjoys most about his job – that he is the person people depend on, to fix seemingly unfixable issues.

As a freelance engineer, Cadastre has worked on the soundtrack of Disney’s “Cars”, recorded indie bands such as …a lion, Docile and Love the Empire. He also recorded the theme song for Square One Shopping Centre and mixed live sound for country star Justin Hines and Family Channel star Brett Ryan and also worked with hip-hop artist Bishop Brigante. Most recently he had an exciting opportunity to act as an Assistant Engineer for the recording of Drake’s upcoming album.

Stay tuned for several more of our reviews and hear the opinions of graduates themselves in the coming days. Be sure to check out their success stories! 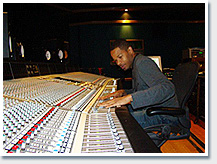