One never knows where an education will lead. Just ask music production graduate Mark Dolmont. After graduating from the Audio Production & Engineering Program, Mark’s work in the audio post-production industry has taken him literally to the other side of the world, allowing him to experience an unbelievably diverse range of cultures and locales, all the while doing a job he loves.

Mark began playing drums and guitar at a young age, often playing in bands with friends. After high school he headed to St. Francis Xavier University in Nova Scotia for their jazz music program, but after two years of study, he realized that his aspirations in music were in a different vein. After exploring numerous options on the internet, he came across our website, and as he said, “it just clicked.”

Mark quickly learned that the pace of a school like ours is quite intense. He mentioned in his review of the program that “it took a ton of work and late nights, but that’s what I expected it would take to survive in the industry, so I was okay with it.”

As is the case with many of our other students, Mark realized that two crucial elements help separate the Institute from other arts-oriented schools: the quality of the equipment and facilities, and the world-class faculty. “I think in any organization or company, it’s the people that really make or break it, and the instructors I had at Metalworks Institute, regardless of subject, were very knowledgeable and still active in the industry.”

After graduating, Mark headed back to the east coast to do some freelance work on a number of music projects. But he was also bitten by the travel bug, and decided to take a trip to south East Asia to look for work in Singapore.

“I started working at a studio part time until I sorted out a more full time position,“ says Mark, “and after two weeks I got a phone call from Yellow Box Studios, one of the leading audio post facilities in the region. This is where I continue to work today. Here, I have gained invaluable experience in audio post-production, and we have actually expanded our business into recording and mixing music too. This is sort of the perfect model for me now, because I like doing all types of audio work and get to apply all the knowledge I took from Metalworks Institute.”

Through his work at Yellow Box, Mark has gained experience in recording, mixing and producing for bands, composing and recording television commercials, and doing location recording, foley and mixing for feature films. “And, somewhere between all these things I still find time to travel around the region to surrounding countries like Thailand or Malaysia for the holidays or long weekends.”

Sounds like Mark is living the Recording Industry dream! 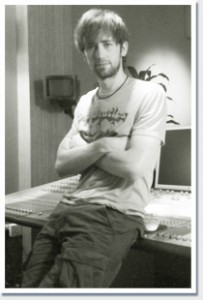