Music has played a vital role in the lives of many of our students, both prior to their enrollment at the Institute, and certainly afterward. Many students satisfied their musical itch playing in bands, while others fulfilled that need by working on the other side of the glass, or backstage.

In David Mohacsi’s case, he gained valuable experience in both sides of the music business prior to enrolling. David played in numerous bands during his early twenties, bands that toured throughout the United States and Canada. One of those bands, The Pylons, also enjoyed some video airplay on MuchMusic.

David’s interest in the other side of the business evolved during a three year period he spent in South Carolina. During that time, David gained considerable experience in live sound: he worked as the head engineer at a club, and also mixed front-of-house sound for several festivals. He also had his own home studio, and recorded a number of local artists. That particular experience fueled his desire to learn more about recording, which led to a return to his Toronto hometown and enrollment in the Audio Production & Engineering Program.

Thanks to his newly acquired skills along with his previous experiences, David formed a great foundation to launch his career in the entertainment and recording industry. David and fellow grad Matthew Pigott started their own MPaudio production company. They have subsequently mixed an EP and produced a single for Duncan Davies (MTV’s The City), and have also done sound design and mixing work for the new CTV show ‘The Listener’. Looking into the future, David continues to gain tremendous experience as a Pro Tools operator and assistant engineer for Juno-winning producer Gavin Brown. 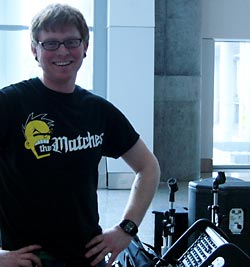