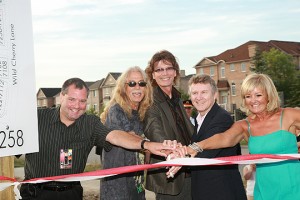 In July, the members of the world famous rock band — drummer Gil Moore, guitarist Rik Emmett and bassist Mike Levine — were honoured by their hometown when a Meadowvale street was named after them. From now on, the roadway that encircles a newly built subdivision at the intersection of Derry Road West and Terragar Boulevard will be known as Triumph Lane. The band was joined by friends, fans, family, City Councillor Sue McFadden and Conservative Member of Parliament Brad Butt at the street for an official ribbon-cutting ceremony. True to rock and roll form, they brought along a chainsaw for the cutting and attendees were treated to a fireworks display.

Following the ceremony, the crowd headed over to the nearby Lionheart British Pub to listen to a number of bands and musicians, such as KC Roberts & The Live Revolution and Mike Celia.  Each artist provided their own musical interpretations of some of Triumph’s classic songs; Never Surrender with a horn section was a definite highlight. “This is pretty exciting,” said Emmett, who lives in Lorne Park; “the room is just pulsing with electricity.” Moore, who has lived in Mississauga since he was six years old, described it as a proud and unique moment in his life. “For me, this is unbelievable when I think about my days growing up in Mississauga,” said Moore; “this is really a tremendous honour when you think about some of the great people they’ve named streets after like Oscar Peterson and Silken Laumann.” Levine, who hails from Toronto, joked he was going to contact Toronto mayor Rob Ford about getting a street for Triumph in the Big Smoke. Emmett jokingly called it the band’s first step in a campaign to get a “very large statue” of Triumph erected at the Civic Centre. Emmett was taken by surprise when he received a cake for his birthday, which was caught on camera and can be viewed at: http://www.youtube.com/watch?v=Be8GiiE5YBI

Triumph, arguably Canada’s largest arena rock act of the 1970s and 1980s, released more than a dozen albums over a lengthy career. Some of the band’s biggest hits include Never Surrender, Lay It On The Line and Magic Power. The band has also been inducted into both the Canadian Music Hall of Fame and the Canadian Music Industry Hall of Fame.
Rick Frayne helped organize the event and, as a long-time fan of the band, said he thought the street naming was a fantastic way to recognize Triumph. “They’re truly a hometown band and I thought this would be a great memorial for people to remember them by,” commented Frayne.

While there was plenty of celebration, the evening also had a serious side. Funds raised at the event through silent auction and ticket purchase will be donated to Wounded Warriors; an organization that works to help injured Canadian service members. “What we do as musicians is pretty easy stuff,” said Emmett; “we’re very lucky and blessed to have the jobs we do and there are people out there like soldiers who have very hard jobs that deserve to be acknowledged. Anything we can do to make that happen is a natural.”

Metalworks Production Group provided the equipment for the evening and the students volunteered their time and talents to take care of band changeovers, stage management, set up and tear down and the live mix.