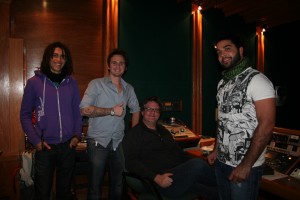 Barbadian rock/alternative band Threads of Scarlet were at Metalworks Studios to mix and master their first CD, “Katharsis” In November and December of 2010.

The band is comprised of vocalists/guitarists Nick Ward and Jesse Foster, who are also the group’s songwriters, bassist Mark Glinka and drummer Stu Dam.

Jesse explained the journey that brought them from sunny Barbados to Mississauga, Ontario at the beginning of winter.

“To us, Canada has been at the forefront of the rock/ pop/ alternative scene for quite a few years, and we decided to make it our choice location for mixing and mastering the album. It is a country that has produced bands like Nickelback, Billy Talent, Finger 11, Sum 41, Three Days Grace, Good Charlotte, and Simple Plan… this speaks volumes.”

The decision to come to Canada was also influenced by the Album’s producer, John Roett.

“John is also very familiar with the Canadian scene, and Nick went to Bishops University, so those factors helped in the decision. We like Canada.”

John sourced all the top studios in the Toronto area and also contacted Brian Irwin, a friend of his at Warner Music Canada, who highly recommended Metalworks. From a Barbadian perspective, shopping for a Canadian studio was a simple task when they learnt that Metalworks had won “Recording Studio of the Year” 12 times in a row.

The band and producer were happy with the time they spent with Metalworks engineers. “The experience at Metalworks surpassed all of our expectations. From the moment we got to the studio, the vibe was right. Studio Manager, Paul Gross and freelance engineer Eric Ratz (Cancer Bats, Billy Talent, Sarah Harmer) greeted us and there was an instant connection. The studio gear was top of the line, and the room had a great, true sound. What we heard was accurate.”

The band describes the record as having a variety of musical styles. Guided by Roett and producer Anthony Lowhar, the album’s alternative rock sound came together through many long hours of creative experimenting.

“Katharsis comes from the ancient Greek word meaning an emotional cleansing. This is actually a very accurate single-word representation of our writing on the album, as most of the songs had their genesis in personal experiences.” Nick explained.

Mastering engineer Scott Lake put the finishing touches on the album in Metalworks’ Studio 5, what the band describes as “the icing on the cake”.

Threads of Scarlet is preparing for performances at SXSW in Austin Texas in March, and is launching the CD and their website threadsofscarlet.com “Our immediate focus is on targeting record labels and publishers,” said Nick. “We’ve spoken to a few industry people already, and the response has been very positive, but we have to weigh our options carefully…There’s no denying that a major label can help us achieve far more than we can on our own, so we’re now entering another exciting stage of the journey.”