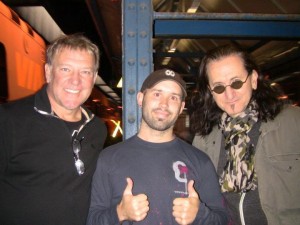 Four of our students had the opportunity of a lifetime to work with rock legends Rush on September 17th.

Once a year, Rush hosts a charity event called “Grapes Under Pressure” which benefits the humanitarian actions of Grapes for Humanity Canada. Over 60 wine lovers joined Alex Lifeson and Geddy Lee at Union Station on September 17th where they were greeted by our very own students who were in charge of all the logistical aspects of this excursion. Their main concern was ensuring that everyone ended up on the right train at the right time which is a difficult task considering the size of Union Station which is the busiest passenger transportation facility in Canada serving over 200 000 passengers a day. Upon arrival, the first thing that Alex and Geddy did was introduce themselves to our students Tyler Warris, Josh Phillips, Dylan MacIntyre and Danny Johnston, shake their hands and thank them for their help. The wine lovers then successfully boarded their train to Belleville from which they were bussed to Huff Estate Winery in Bloomfield, Prince Edward County. They took on the role of wine-makers for a few hours at this picturesque and award winning destination while being treated to a variety of the very best wines being produced by various Vintners from the region. Famed Chef and County resident, Michael Potters (Angeline’s and The Spoke Club), prepared a gourmet Vintner’s Lunch which was enjoyed alongside the charming vineyards of Huff Estates. They participated in the excitement of a silent auction and some other special surprises during the day before they re-boarded their private train back to Toronto.

Andy Curran, A&R at Anthem Entertainment Group, had this to say about our volunteers.  “A big special thank you to all of our volunteers. Amazingly… they were at Union Station before our SRO management team arrived …how un-rock n roll is that? Unless of course they stayed up all night! They were all a great help in directing all the bleary eyed guests who arrived at 7:30am and  had no idea where the train was. The event was VERY successful & raised over $140,000 for the charity Grapes for Humanity. Geddy & Alex thank the volunteers from the bottom of their hearts”

Our Promotions & Events Coordinator, Joel Martin, had a chance to catch up with our four students to ask them about their Rush experience:

“Even a week after the event I still can’t believe that i met the guys from Rush! It was such a great experience meeting them. I’ve been a fan of Rush for years now going back to when my Dad first introduced me to their music. I’ve seen Rush live twice since then and both times I saw them they absolutely blew my mind. Looking back a year ago when I started my program I never thought I would have had such a great opportunity. It just goes to show if you work hard and give the time and effort it will eventually pay off!” -Dylan MacIntyre (Professional Sound & Business – Studio Production Major)

“We made sure that participants and Rush themselves got to where they needed to be in time and in order. We were given some pretty cool shirts and got to meet the members of Rush and their crew! I am a huge fan of Rush for they are not only a Canadian band but they have shown what perseverance and hard work can accomplish. I also take great influence of my playing from Geddy Lee who is one of those bass players whose music challenges but allows for good progression and development of technique. He’s showed how playing a small amount at times can add to a song just as much as playing a lot of notes. He’s also taught me that playing for the song is much more important than playing for yourself. Volunteering with the Institute has allowed me to meet popular and exciting individuals I’ve always wanted to meet, which would have been nearly impossible to do just as a fan. The volunteer opportunities are a MUST for any inspired individual in any program because it can only compliment your skills as a whole with your education in the classes.” -Tyler Warris (Professional Sound)

“I had a great time helping out at Grapes Under Pressure which was a rare and exciting opportunity to work with full blown rock legends. I had to wake up at ten to 5 in the morning but it was totally worth it. I had a chance to meet some incredible people and make a good impression on some heavy hitters in the industry. The handshake from Mr. Geddy Lee was the icing on the cake. Essentially we were liaisons between the guests and the event coordinators. I think I made a good impression on the event staff and I hope to connect with and work with them again. Alex and Geddy were great, very appreciative and it was awesome to meet them. Being a guitarist and aspiring producer/engineer who deeply enjoys rock music and music that lives on the experimental side of things, it was great to meet some hugely influential pioneers in the field who are still going strong today. So far nearly everything I’ve volunteered for has given me a chance to either be backstage for something cool or be in a position to meet incredible people, sometimes in a one on one situation. So far I’ve been exposed to more industry people in volunteer positions than anywhere else, and aside from my teachers, had pretty much all of the face-time with industry figures through volunteering as well. MWI gives us the opportunity, the rest is up to us.” -Daniel Johnston (Professional Sound & Business – Studio Production Major)