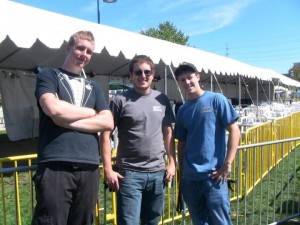 Mississauga’s annual blues and jazz festival, Southside Shuffle, once again took over Port Credit’s Memorial Park, September 9th through 11th. The beloved festival even colonized nearby Lakeshore Road for Street Shuffle, which saw the street, patios and doorsteps transformed into performance spaces. The main stage’s packed schedule included appearances by the Blind Boys of Alabama, Mavis Staples, as well as a tribute to The Supremes.

Our Institute and Metalworks Production Group were right at the center of this 13 year old tradition providing equipment, audio engineers and volunteers to ensure great sound and a smooth operation.  Joe Natale, Chair of the Show Production and Event Management Program, served as technical director for the festival. Brand new students, who were only one week into their programs, were given the opportunity to get five days of hands-on experience at one of Ontario’s top 100 festivals. Joe had this to say about our students and their involvement. “Having actual hands on show experience is the best way to learn for any student and they stepped up to the challenge in a big way!”  Andy Linden, Instructor at the Institute and Lighting Manager at Metalworks Production Group, served as lighting designer for the festival.  He believes that “the experience that a student gets when a little pressure is applied in a real-time setting really makes them shine.”

You can watch a 10 minute video that captures 59 minutes of the Southside Shuffle festivities at: http://youtu.be/X6Ra8YNTmOI

The Blind Boys of Alabama headlined the main stage on Friday, September 9th. They are recognized worldwide as living legends in gospel music. Celebrated by the GRAMMYs and the National Endowment for the Arts with Lifetime Achievement Awards, inducted into the Gospel Music Hall of Fame, having performed for two presidents in the White House and winners of five GRAMMY awards, they have attained the highest levels of achievement in a career that spans over 70 years and shows no signs of diminishing.

Mavis Staples headlined the main stage on Saturday, September 10th.  Staples won her first GRAMMY award in the category of Best Americana Album for You Are Not Alone. She has recorded with a variety of musicians, from her friend Bob Dylan (with whom she was nominated for a 2003 GRAMMY award in the Best Pop Collaboration With Vocals category for their duet “Gotta Change My Way of Thinking”) to The Band, Ray Charles, George Jones and Natalie Merchant.

“It’s not very often that only one week into your studies you can add that you worked with the Blind Boys of Alabama and Mavis Staples to your resume!” says Professional Sound student Cole LeBlanc.

Many thanks to all of our students who volunteered their time and skills to the 2011 Southside Shuffle!