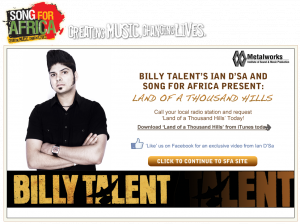 We have partnered up with Song For Africa to help raise awareness of some of Africa’s most urgent developmental issues such as HIV/AIDS and Child Rights through the vector of music and music production.

When asked about partnering with the Institute, Song For Africa CEO Darcy Ataman had this to say: “Partnering up with Metalworks is a great opportunity for both companies. It is the best school in Canada for Audio Engineering so that ensures that we get staffed with talented people who know what they’re doing.  Several MWI graduates will get the opportunity of a lifetime to work on some projects in Africa and gain some real-world experience. They’ll be recording Rwandans paired up with Canadian musicians and delivering those songs to radio. Some of the 8-16 year old kids come to us in a catatonic state with all the horrible things they’ve been through and I’ve seen music bring them back to life first hand.”

MWI students got the chance to work with producer David Bottrill (Tool, Silverchair, Peter Gabriel) and Ian D’sa from multi-platinum rock band Billy Talent who have been great supporters of Song For Africa from the start. The students pitched Ian’s song “Land of a Thousand Hills” to Canadian radio and helped to promote it.

Song For Africa started with a song…and became so much more: