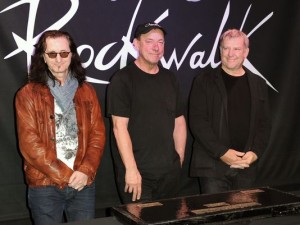 Longtime friends of Metalworks, Rush, were inducted into the Rock and Roll Hall of Fame yesterday. In their 44 years of making music, they have won 8 Juno Awards, received 7 Grammy nominations, sold over 40 million records worldwide, been inducted into the Canadian Music Hall of Fame, and are among Canada's most influential musicians.

Congratulations to the band for their well-deserved induction!