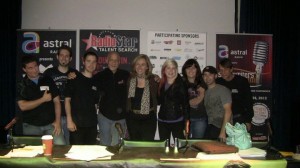 On October 2nd and 3rd, we hosted Radio Star’s New Songwriting Workshop in the south auditorium.  Over three hundred and sixty songwriters registered for this free all day event. Attendees were treated to songwriting tips, stories, info sessions, performances, as well a demo listening session.

The evening started with a songwriting clinic hosted by platinum artist and acclaimed songwriter Dan Hill. This Grammy and Juno award winner has written hits for Celine Dion, Britney Spears, 98 Degrees, Backstreet Boys, Rod Stewart, Michael Bolton, Tina Turner, Reba McEntire and Alan Jackson to name a few. He talked about his early days as a musician and how he started writing love songs to try and win over a girl he had fallen for. That experience led him to write the international hit “Sometimes When We Touch,” which is closing in on 5 million sales in America alone and has been covered by hundreds of artists around the world. He suggested that a songwriter needs to write every day and not to just wait until inspiration hits. A songwriter should put in a full day’s work as with any other profession. He said that rejection is a part of songwriting and it is not something that a songwriter should let undermine what they set out to accomplish. Hill recalled the time he was working with a notable artist, who was all set to record one of Hill’s songs when everything fell through. That same song ended up being recorded by a new artist, Celine Dion, who went on to sell 30 million copies of her album featuring his song. If his song had not been rejected by the first artist, he never would have had his song picked up by Celine Dion. He believes that the one trait that is present in all successful musicians is determination; he recognizes their fearlessness and sees the focus in their eyes.

The evening continued with an educational seminar on SOCAN and publishing which featured Rodney Murphy, Jodie Ferneyhough and Amy Eligh. Rodney Murphy is the Education and Outreach Manager for SOCAN – the Society of Composers, Authors and Music Publishers of Canada.  Jodie Ferneyhough is the current President of the Canadian Music Publishers Association and he was Creative Director for Universal Music Publishing Canada for nearly a decade.  Amy Eligh is the Creative Manager at Casablanca Media Publishing. They began their seminar by shedding light on the often misunderstood world of publishing and then opened up the panel to questions from the audience for the remainder of the seminar.

The final two hours were reserved for the much anticipated demo listening session. Attendees were able to submit one of their songs to be listened to and critiqued by Tom Barlow (Juno-nominated artist), Maie Pauts (radio host Boom 97.3), Ariana Gillis, Mary Simon, Amy Eligh, Jodie Ferneyhough and Dan Hill.

This event was a great opportunity for alumnus John Benz and current student Josh Phillips to put their education into action; they were responsible for all the audio and video aspects of the entire workshop. They arrived the night before to set up all the equipment and test it out to ensure that everything would run smoothly the next day. On the day of the event, they showed up early once again test the equipment and soundcheck Dan Hill; as well, they mixed all the performers and presenters.  A big thank you to both John and Josh for all of their help with this great workshop!

For more information about this annual event, please visit: http://www.radiostar.ca/songwriters-workshop/