Nathan Jackson is a Toronto based Engineer/Mixer/Producer who offers in studio tech services, engineering, mixing, editing and production for both music and post-production needs. He has had the honour to be apart of productions that have been nominated for both The JUNO Awards and for The EMMY® Awards.

Nathan is an Honours Graduate from MetalWorks Institute of Sound & Music Production. During his time at MetalWorks, Nathan studied everything from music production and theory, in depth mixing and engineering strategies, to the fundamentals of sound and electronics. Nathan graduated in August of 2019 with a Diploma in Audio Engineering and Music Production, and was honoured with the Leny DeRose Mentorship Achievement Award.

Nathan is a freelance Foley Editor with JRS Productions, where he is responsible for the editing and synchronizing of foley recordings. His work is used in TV, Film & movie productions such as “The Hardy Boys”, which is currently broadcasting on YTV and streaming on major platforms such as PrimeVideo, Disney+ & Hulu.

Nathan has also had the honour to work with Ross Hayes Citrullo of RHC Music. He was 2nd chair engineer on roots band ByWater Call, which was the #1 ‘Blues and Roots’ record in Canada for 11 weeks and the #1 recording in the UK for March 2020. He also was assistant engineer on newly released, chart topping album ‘The Reckless One’ by Juno Nominated artist Samantha Martin & Delta Sugar, which was featured in ‘Rolling Stone’ magazine, and nominated for ‘Blues Album of the Year’ in the 2021 JUNO Awards. In addition, Nathan assisted in the mixing of an EMMY® nominated documentary for the Buffalo Bills NFL team. 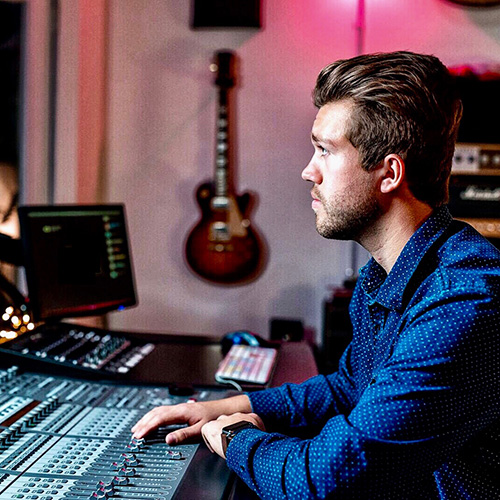