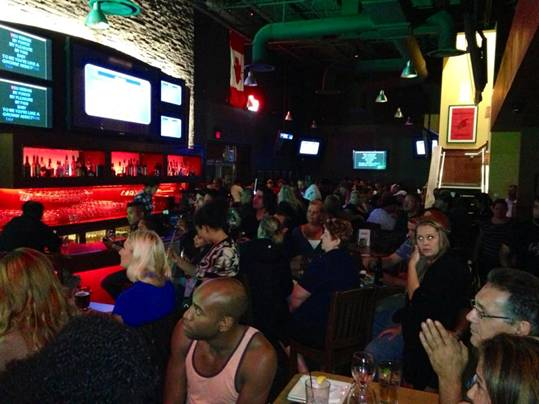 On Tuesday, August 27th Boston Pizza celebrated the end of the summer with their Idol Competition Finale! The competition, hosted by Alumni Joel Martin, began July 2nd 2013 and ran every Tuesday until August 27th. Approximately thirty 19+ contestants auditioned each week for a spot in the finale and for a weekly $250 prize. Each week, contestants performed one song in front of an industry panel and live Boston Pizza audience hopeful to win a cash prize and further themselves in the competition. This past Tuesday, seven competed for a chance to win $1000 and a recording time prize packaged sponsored by Metalworks! Special congratulations to our current Music Performance and Technology – Vocal Major student Regina Myers and September 2013 Entertainment Business Management future student Serena Ragogna who both made it to the Boston Pizza Idol Finale!