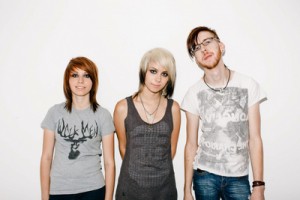 On Monday, July 9th from 7:30pm-8:30pm EST, MWI Backstage Pass introduces the punk/rock band, COURAGE MY LOVE up close and personal in the south auditorium. Watch and listen to them perform some of their songs and talk about performing, songwriting and their experiences in the music business.

Fueled by a passion for pop, punk, metal, social justice and rebellion, the band has quickly made a name for itself touring throughout Ontario and Quebec, collecting new fans at every stop. Alternative Press Magazine named Courage My Love as one of “100 Bands You Need To Know in 2012”.

Their music videos for Bridges, Barricade and Anchors Make Good Shoes (if you have issues) were added into heavy rotation at MuchMusic and at MusiquePlus. Courage My Love released their debut EP ‘For Now’ on October 31, 2011 on Homeskool Prom Records/Warner Music Canada. The expanded version of ‘For Now’ will be released in Japan on July 2012 on Spinning/Grizz-Rhythms. www.ilovecouragemylove.com
MWI Backstage Pass offers a live and online audience an inside look into the craft and business of some of Canada’s best musicians and performers. Presented by the Metalworks Institute Music Performance & Technology Programs, this brand new streamed forum presents these artists up close and personal to an audience of developing vocalists, guitarists, keyboardists, drummers and bass guitarists and music fans across the country. Participants have the opportunity to ask questions live in person, via twitter or online chat during these streamed events.

TO JOIN THE LIVE AUDIENCE, PLEASE RSVP TO: rsvp@metalworksinstitute.com (space is limited, so RSVP NOW!)
For more information about this event call (905) 279-4000 ext.1720