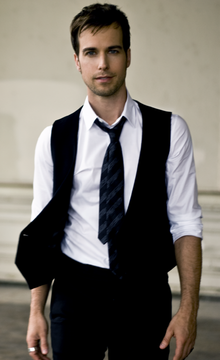 On Monday, March 26thth from 7:30pm-8:30pm EST, MWI Backstage Pass introduces Luke McMaster up close and personal in the south auditorium. Watch and listen to him perform some of his songs and talk about performing, songwriting and his experiences in the music business.

With a lifelong commitment to music, Luke McMaster experienced early success as one half of the Canadian pop duo from Winnipeg, McMaster and James. The band’s self titled CD went GOLD in 2000 and the duo opened for Christina Aguilara on her Canadian tour that same year. Although the band dissolved in 2002, McMaster has worked steadily as a songwriter, arranger and producer since then.

McMaster is signed to Universal Music Publishing and has credits for notable artists including Rihanna with the UK’s Judie Tsuke and other notable artists & songwriters such as Nick Lachey, Eva Avila, Marc Jordan, Randy Bachman, Xandy Barry, Christopher Ward, Rob Wells and Shelly Peiken. His music has been featured in television’s Instant Star, Degrassi the next generation and on Canadian Idol productions. His performances are built around songs and artists that cross the pop, Blue Eyed Soul and early Motown musical landscape, including his own classic originals. His is currently in production on a new solo album that will be released in July 2012.

Located just outside of Toronto, our Institute is the educational creation and natural extension of renowned Metalworks Studios, home to some of the world’s most successful artists and producers. Diploma programs have been designed for those who wish to understand the complexities of the entertainment industry and build a successful career on a solid base of knowledge. We are providing an opportunity for students to explore their art through the understanding of its science.

TO JOIN THE LIVE AUDIENCE, PLEASE RSVP TO: rsvp@metalworksinstitute.com     (space is limited, so RSVP NOW!)