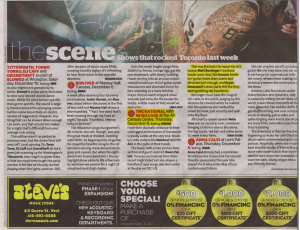 This past December Metalworks Production Group supplied the sound and lighting for The National with Neko Case at the ACC. Metalworks Production Group staff included, Andrew Werlick (System Tech), Shaun Shuell (A2), Mitch Mazerolle (Lighting Lead) and Greg Evans (Dimmer Tech).  An L-Acoustics System consisting of 12 V-Dosc and 3 Dv-dosc per side was used for main hang and for side hang per side were 10 Dv-dosc. Along the lip of the stage 4 Dv-dosc front fills were used. Bottom end was L-Acousitcs SB218 subs with 10 per side and all amplification was L-Acoustics LA48’s and Lab Gruppen FP6400. As for lighting, we supplied 20 Martin 700 Profiles, 11 Martin Atomic 3000 Strobes and 23 Martin Stage Bars as well as a lot of haze!

Sarah Greene reviewed the show in The National Review of NOW Magazine stating that “This was the best I’ve heard the ACC sound. Matt Berninger’s baritone vocals were clear, the Dessner brothers’ guitar tones were warm and distorted just enough, and Bryan Devendorf’s drum parts felt like they were grabbing my hearbeat.”