I am a truly obsessed music fan. I can’t even begin to describe how much control music has had on my life and me. Heck, that’s a complete other story or blog, and maybe better suited for Dr. Freud.

There is one thing, though, I noticed about myself and my obsession with music, and that is my love of a certain, particular instrument. I know I am not alone in thinking like this, as some people get off on the violin, some the banjo, some an electric guitar, etc., etc.. But, for me, the magic is in the Mellotron.

Huh? The Mello-what? If you’re rhetorically thinking that, I am not surprised. So indulge me…

Imagine a keyboard instrument that provided musicians with sampled sounds of other instruments. Big deal, right? You can do that on your iPad right? Well, the original Mellotron was much, much bigger and first saw life in 1963.

The history of it actually begins in America with a previous incarnation as the keyboard instrument known as the ‘Chamberlin’, invented by a man named Harry Chamberlin from Wisconsin in the late ’50s. Unfortunately, Harry was so fixed on the idea of his ‘Chamberlin’ being a household instrument for the entire family to play, he did not see its’ more practical and lucrative potential as an instrument for recording artists. Besides it was so big & clunky and was difficult to mass produce. But the sound of it was so unconventional and unique. 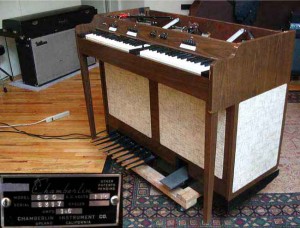 Then by the early 60s, as Harry started to produce more Chamberlins, he hired a sales person to do the pitch to Music Instrument stores, Sears, and other family oriented stores. What the Sales guy actually did was, rip Harry off and sell the blueprints and idea for a copycat instrument to a company in the UK called Mellotronics. Unknown to them was the fact it already had a name (and patent assigned) and they adapted the instruments’ look, size and mass product ability.

Before long, a few key & respected UK musicians were endorsing the new ‘Mellotron’ and the instrument even had a royal endorsement from Princess Margaret and King Hussein of Jordan. The true and most effective boost in its popularity was when the Beatles got their hands on one in the EMI owned Abbey Road studios. The Mellotron made its’ debut with the Beatles on their Sgt. Pepper’s Lonelly Hearts Club Band’ album and again on their Magical Mystery Tour and The Beatles (The White Album). Not bad for an endorsement. That album was pretty much the most popular and best selling Rock album of that year. Before long, many other famous and successful British Rock bands like the Moody Blues and King Crimson, were using the Mellotron in their recordings. But keep in mind, the Mellotron was still kind of clunky and not that conducive to mobility, plus there were not that many to be had. There were, in fact, very expensive and cost almost as much as an average home in the UK, at the time. The other complication was, back then, an instrument like the Mellotron was so new and unfamiliar to most that, if it broke down it required a specialized technician to fix it. So, overall, it becomes something of a rare and precious commodity.

So what did it sound like? Well, its’ best to let the music speak for the sound and below you will find a list of some incredible albums that feature the Mellotron, but I will give it a try with a layman’s description…

Imagine a rich, textured sound that could accentuate other instruments and create a type of unexpected ambience to a song. Wait…that still doesn’t do the description any justice. I feel like I am describing colors to a blind person.

I tell you what…take some time to watch the attached documentary on YouTube. It’s called ‘Mellodrama’ and it is positively enlightening. Then have a listen to some of the album and groups who religiously used a Mellotron. I have a feeling you may want to seek one out for your next recording – or at the very least download the ‘Mellotron’ app off the Internet for use on your smartphone or iPad.

Some GREAT Mellotron albums to check out:

King Crimson ‘In The Court Of The Crimson King’