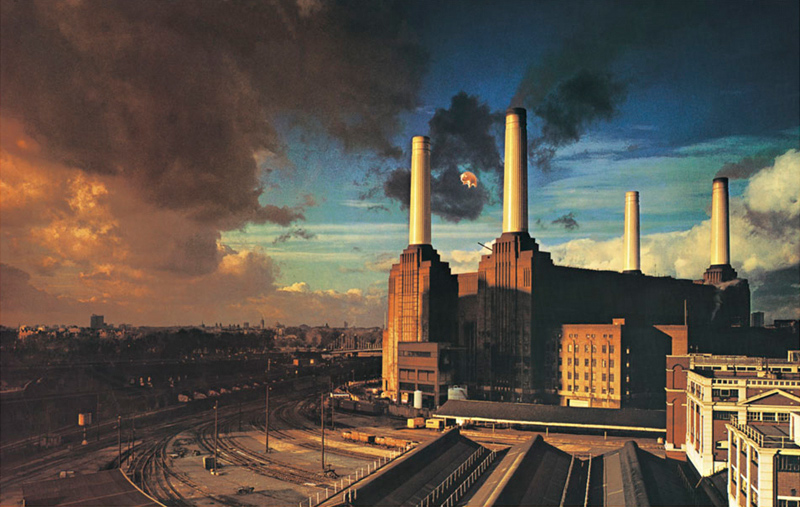 Hipgnosis. Say it. Sound it out. It’s a play on the words ‘Hip’ and ‘Gnostic’ (g is silent btw). Contrived by Storm Thorgerson and Aubrey ‘Po’ Powell the late 1960s, as the name for their graphic design company in London, UK, ‘Hipgnosis’ was meant to have a sense of current flair with a twist of surreal mysticism.

Storm Thorgerson, who just recently passed away at the age of 69, was undoubtedly the most prolific designer of album covers from the early 1970s onwards.

The work generated at Hipgnosis by Thorgerson, Powell (and George Hardie), has graced legendary album covers by music from Pink Floyd, Led Zeppelin, 10cc, Black Sabbath, Muse, The Mars Volta, Peter Gabriel, The Cranberries, Genesis and literally dozens & dozens of others. Their work more than completed or complimented the music. It was an artistic statement all on its’ own. Their craftily placed surreal images (before the days of Photoshop) with hidden messages, meanings, metaphors and all ’round play on puns, really & truly was something to behold. The book, ‘For The Love Of Vinyl‘,  by Storm Thorgerson and Aubrey Powell, is in itself a work of art. Check it out sometime.

From the mid 1960s and throughout the 1970s, the artistic control of the LP Album cover design began to be controlled more & more by the artists. Gone were the stale and stereotypical album cover designs for Pop or Rock n Roll artists. Starting with ‘Rubber Soul’ & ‘Revolver’ by The Beatles, who commissioned the artwork, more & more artists went through the somewhat painstaking process of finding the right person to compliment the music with equally captivating artwork. For many music fans who grew up during the late 60s, 1970s, 1980s and even the 1990s, the album cover design was an important element to the overall enjoyment of the music. If the art was a good as the music, it was just as memorable. If the art was better than the music, that was all the more reason to go back and give the music a second or third listen. For some, like me, the album cover was an added bonus to the music. All those 12×12″ LP covers stacked about with ‘art’ everywhere. It was a grand sight to behold.

But then came the ‘digital age’ & the 21st century. The Compact Disc introduced in the 1980s automatically reduced the LP cover art from 12 x 12″ to 4.75 x 4.75″. That was disheartening to see. Then the mp3 and digital file now features a 1×1″ album cover. Smaller than a matchbook. Wow. To be blunt, that is now pathetic. It has come to the point in the evolution of modern music, where the album cover design has no real reflection on the music (to the listener) nor does it seem like most young music listeners really pay attention to the album cover design. The only recent example of where the album cover design was talked about more than the artists’ music, was the recent David Bowie album ‘The Next Day’. The Bowie-sphere and the web related blogs & reviews mentioned the cover design incessantly. IMHO, the design of Bowie’s latest album cover was a statement exactly about what I’ve been trying to say. Bowie once said back in 2000 that popular was becoming, and will become within 10 years, just like electricity and running water. He is not far from the truth and nor was his latest album cover design.

I for one and am glad the LP Vinyl has made a resurrection amongst younger music fans, for only then will they be able to fully appreciate the majestic presence of the album cover.

Here is a list of a few of my favorite Hipgnosis album covers and a few examples. If you like the art, then check out the music…