Recently, I wrote about Classical music in the 21st Century, here on my Metalworks blog. I wrote about how some elements have changed and adapted to the changing of the times. One element of Classical music that has not really changed, which has nothing to do really with the music, and that is the respect the audience has for the musicians. During any performance you could hear a pin drop when the music is brought down to that contemplative level. Even better is the inaudible second or two at the end of the performance, while the audience regains its’ breathlessness, followed by the thundering applause. That is a remarkable moment and feeling to experience at any classical performance.

So, where am I going with this? Well, let’s change the environment to a bar, club or even seated venue, with a contemporary act today. Be it singer-songwriter, band or DJ, no doubt the level of audience chatter can get loud, sometimes louder than the music itself. For one thing, keeping in mind, alcohol is the primary cause for the elevated audience noise. So, by osmosis, you can’t naturally fault them on being a noisy audience. Besides, they paid their money to get in, they’re there to see the band and friends and have fun! Right? No big deal?

Well, yes…up to a point.

In these early days of 21st century communicative technology, live music audiences find themselves obsessed with their devices and social media connections, even during a show by their favorite artists. From the countless arms stretched in the air taking photos or videos (usually pathetic in quality), to the distracted and constant texting, this type of audience behavior has given rise to the ire of the artists themselves. Some have called for outright performance bans of such devices. Veteran Prog Rock band King Crimson have for decades be well known to ban cameras at their shows and walk off stage at first sight of a flash. Their fans know better now and God help the idiot who does try to take a photo at one of their shows. Other artists, recently Zooey Deschanel’s band ‘She & Him’ were the latest to warn concert-goers at the venue & be vocal on the web about fans who watch the shows through viewfinders. There’re others too. Have a look at the links near the end of this post. 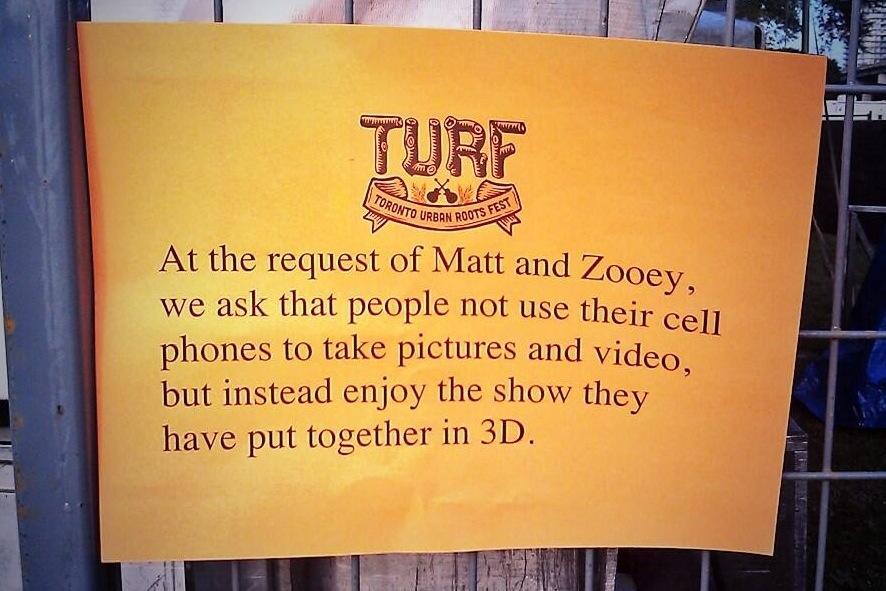 But, again, this is NOT the motive and moral behind this blog entry. What I hope is to remind our students and colleagues, alike, that when we go to a show or performance – whether it be acoustic or electric – as a representative of a label, management, publisher or whatever, it is our DUTY to be respectful of the artist and the music. It is NOT our place to act like the paying customer and chat & gab away while the acts performs.

Once, when I worked at Virgin Music, my boss and President, Doug Chapell reminded us, the morning after an acoustic show by an act on our label, that we were not to talk during the show and kindly remind our invited guests to be quiet during the show and watch the act. Be diplomatic and professional when you ask them, and by doing this you reinforce in them just why they are there in the first place. Talking during a show, as a professional in the music business, is just downright disrespectful. His words and advice seemed crystal clear to me then and still do now.

For one thing, try putting yourself in the place of the artist. Live performing can be daunting enough without having a reckless and noisy audience. But, above all else, as a professional in the music business, you now have this responsibility and duty to the act and to yourself. Trust me, if you cannot show this level of maturity, respect and responsibility for the act, the music and your career, one day someone is going to remind you, like I was reminded. Maybe, though, that one time, they won’t be so nice in how they remind you.

Ssshhhhh, please.
7 Musicians Who Would Like You to Put Away the Camera or Else They’ll Do It For You
http://www.digitaltrends.com/photography/7-musicians-who-would-like-you-to-put-away-the-camera-or-else-theyll-do-it-for-you/