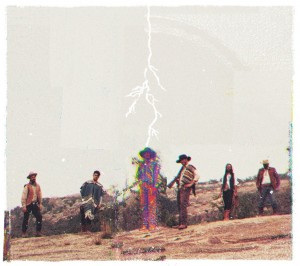 I have to admit. I have found myself thinking that Rock Music is near dead, and not just once. A number of times it has crossed my mind over the past decade. Not that I have anything against the current crop of Hot 100 stars or Top 200 Billboard sellers. It is obvious that Rock music has been pushed aside as a dominant Genre of music for newer regenerative sounds & styles. It’s part of Pop Music evolution. It is part of the personality of that ‘Beast’ we call Pop Culture. It cannot be controlled.

Though, what is ironically stimulating these sometimes quasi-melancholic thoughts about the demise of Rock Music, are the mantras chanted & sung by many of the artists of the 50s, 60s, 70s & 80s, like ‘Rock n’ Roll Will Never Die’ or ‘Long Live Rock’. I believed those mantras. I guess I still do. I know I do.

Or, if I could use a sci-fi/crime scene scenario as an analogy, Rock music is like a bullet-riddled body that just won’t die. Almost ‘terminator-like’, just when you think it is dead, it arises.

What has got me thinking about Rock music again, is some of the current crop of musicians that are creating not just a newer brand of Rock Music, but unabashedly taking song writing & song style cues from the past.

Take for example the newest album by the group Black Joe Lewis. Hailing from Austin, Texas, and once deemed the new ‘Godfather of Soul’ as Black Joe Lewis & the Honeybears, their newest release ‘Electric Slave’ brings a lot more to the table.

Firstly, the album cover art is reminiscent of late 60s/early 70s album covers. The band are seen standing on a sloping hill with a big stormy sky behind them and a searing bolt of lightning descending towards them directly above the head of Joe Lewis.   His, sole, color-pixelated image suggests he is the only band member receiving the lightning’s psychedelic power, leaving him with an enlightened look on his face. The band all look dressed similarly like Zapatistas (if you think this means Spanish Zappa fans, you’re wrong. Google it), much the same way the Jimi Hendrix Experience and The Eagles once did, on albums covers of theirs. Already, Black Joe Lewis has my attention.

Then, I listened to the album. Wow, I felt like I was getting smacked around and cold clocked. One punch after another. One song after another. It was like being a member of some Rock music ‘Fight Club’. I was totally getting off on every song/punch and nothing else mattered.

Starting with some serious fuzz guitar and boombastic drums, the album ‘Electric Slave’ kicks off with some serious head pounding Rock on the track ‘Skulldiggin’. Track 2 hits you with your head still spinning. The Rockabilly meets Punk song, ‘Young Girls’, is guaranteed to be a heart thumper & fist pumper. The song could easily have been the soundtrack to some random fight in a random bar, somewhere along the Chitlin’ Circuit years ago. Just picture it as you listen!

Another highlight track is the ultra-murky, swampy blues based number ‘Vampire’. Sort of like Screamin’ Jay Hawkins meets Tom Waits meets Los Lobos. If there was ever a song to play late at night (after a few too many) to howl along to, this is the one. Just don’t be surprised when the person in the room next door to you, is less than appreciative when you try to match the vocals sounds yourself. Howl away!

And, that’s just 3 of the 10 tracks on ‘Electric Slave’! The vocals, the sax, the rhythm section, the guitar and the drums all come together perfectly and the songs themselves are strong to begin with. ‘Come To My Party’ is great 21st Century Funk Rock, while other tracks such as ‘Dar Es Salaam’, ‘Golem’, ‘Make Dat Money’ and ‘Guilty’ keep this Rock machine running steady. There really isn’t any letting up on the record. It’s a party album. It’s a driving album. It’s a fighting album.

So thanks to Black Joe Lewis and the album ‘Electric Slave’, my Faith has been temporarily restored in the decadent preaching of the Church of Rock Music. My stereo feels alive again and to hell with my neighbors! 🙂