I read an interesting article on BBC’s website recently, where some young UK musicians were complaining, yes complaining, about their inability to make music. Why? Simply, because, they have to spend more time than they would prefer, on social media. Sounds incongruous? Let’s look at their complaints/the problem a tad closer…

First off, since the internet and social media has exploded in the first two decades of the 21st Century, the norm (it seems) is more and more song writing musicians began to shy away from the idea of signing to a label (Major label or Major Indie) and in place have formed their own ‘vanity’ labels, then utilizing the web and social media to help promote their music/label, whether it be on a personal website, blog, Facebook, Twitter, Instagram, etc.. Okay, that’s fair, after all, the history of Major labels (the big baddies) has left most everyone with a perception of their reputation of unfairness, lack of commitment or plainly put, being too big for their britches, so if I was a young musician making recordings I might be reticent to sign with a Major Label. Now comes the tricky part…

So, now you have your own label, your own recordings and now you need to promote AND sell it. To promote your own recordings and labels, the first and most obvious step would be to establish a Facebook page, a Twitter or Instagram account. Easy enough, huh? Now comes the hard part – maintaining the profile and connection with your fans. I am sure there are some musicians who revel in this ability to connect with fans, no matter how trivial or superficial it may be, like the Katy Perry, Rhianna or Miley Cyrus type of celebrities. After all, THEY are signed to Major Label deals. Then you have the lower end spectrum of the of the musicians’ circle, the ones who have their own vanity labels and ‘do it for themselves’. This where the BBC article, I speak about, comes in. So many of these musicians, it seems, now have to spend MORE time maintaining their web presence & social media profile and ‘connecting’ with fans, and therefore have less time to create music – the one thing that got them started in music in the first place. At the risk of sounding like some old fart, ‘back in my day’, most (REAL) musicians spent hours a day practicing their craft of playing and writing music. The profiling, promotion and selling of them and their music was the responsibility of the label (and still is). 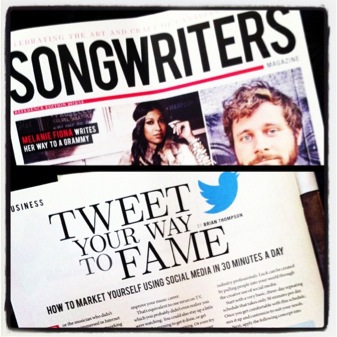 So now, we appear to be at some form of crossroad. Damned if you do and damned if you don’t, so to speak. As an Indie artist, if you fail at maintaining your web presence or social media affiliation with fans, you run the risk of having almost no profile. In fact, I know of many artists who don’t do this and they do, indeed, suffer for it. They have less ‘followers’, which in turn means less people are aware by virtue of ‘Likes’ or by re-tweeting or forwarding links to their sites and/or music. But they continue to make more music, since they have the extra time.

So, what’s the solution? I don’t really think there is one firm solution. It is almost more of a compromise, of sorts. Almost killing two birds with one stone. Some artists, I know, will keep regular updates on social media of their song writing process. Some musicians/bands stream their rehearsals or song writing sessions. Some have even ran promotions to invite fans to their recording sessions. Some have even gone so far as to solicit fans for lyrical content as a promotion – hence, the fan gets their name on a song credit (albeit, having the fan sign some legal document indicating a foregoing payment of royalties or rarely on a official release and more than likely on a obscure ‘throwaway’ song that gets streamed on the artists website or Facebook page, thereby limiting any chance of paying out monies to the fan). Again, I repeat, these are not solutions, just a form of compromising to an growing & ongoing ‘problem’.

Keep in mind, too, that the nature and habits of the music consuming public has changed dramatically in the past 10 years. Less are buying, while more are in favor of ‘streaming’ (is this a sign of their inability to maintain any deep attention span?)

So, in closing, I just want to remind the multitude of young musicians who dare to ‘go it on their own’ that it will take a LOT of work, on their part, to maintain their web presence & social media profiles AND make satisfactory music. More than you may initially think!