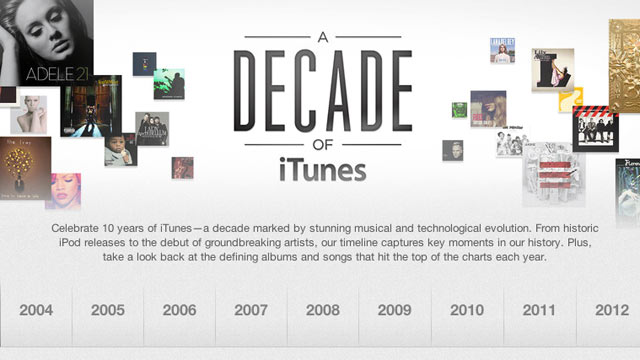 Apple’s iTunes celebrated its tenth anniversary recently. The numbers up to this point are indeed impressive:  25 billion downloads, a catalogue of more than 35 million songs,  more than 190,000 episodes of television, and over 45,000 movies. Currently, there are some 435 million active iTunes users around the world.

When Steve Jobs first approached the major record companies in 2002 about iTunes, the industry was still reeling from its protracted (and costly) legal battle with Napster, the peer-to-peer file sharing site that paved the way for all online music services to come, including iTunes. Napster had a great model, and it was relatively easy to use for young music enthusiasts. Except, well, the music was FREE. The record companies may have been slow to pick up on the idea of online digital music distribution, but that doesn’t mean that they didn’t recognize the importance of Napster, or the need to create their own online music platform. The question was… how?

The labels tried to come together on their own digital platform, but were unable to reach a consensus. That’s when Mr. Jobs arrived on the scene, just in the nick of time. He was happy to demonstrate a beta version of iTunes to the labels, and convinced them it was the way to go. But, he also insisted on a .99 cent price tag, and convinced them to accept limited digital rights management (copying restrictions which were softened even more in later years).

The labels accepted Jobs’s offer, if only because they had no other choice: it was either that, or, let the Limewires and Bit Torrents of the world continue to erode their profits. The price for singles eventually rose to its current rate of $1.29 per song, but in the process, iTunes secured a virtual monopoly on legal downloads of music. Essentially, Apple leveraged its formidable public presence to gain access to the world’s music, music that Apple basically uses as a loss leader to sell infinitely more profitable iPods, iPads, and iPhones. And remember, record companies and music publishers don’t see a dime from the sale of those portable devices, even though it’s their music that (in part) makes them viable (would an iPod be an iPod without the labels’ music?)

When record labels were selling 45 rpm vinyl singles back in the fifties, they were priced at about $1. Today, 50 years later, iTunes is selling singles for about…$1. And the label’s cut of that singular dollar is significantly less than it was in the days of the vinyl 45 (we’re ignoring the artist’s share here, just to be kind).

Can you name another consumer item that hasn’t increased one iota in price in the past 50 years?

The record companies will argue that they had to make this deal with Apple; they needed a proper digital platform to compete with the illegal sites. But in making that deal, did they give away too much? Did they burn the village in order to save it?