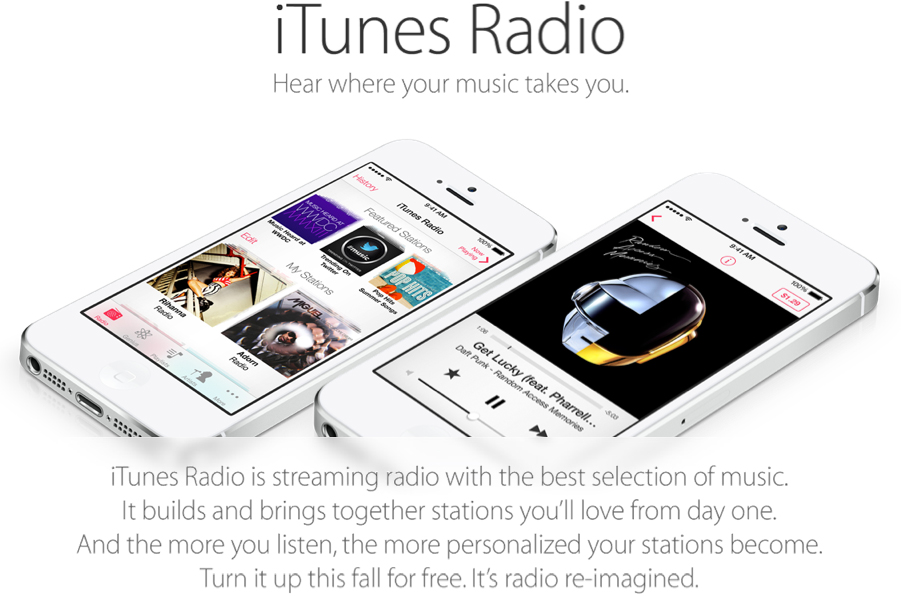 Earlier this month, Apple announced the launch of their new iTunes Radio. This new streaming service is expected to debut in the U.S. in the fall, and will be rolled out in other territories in the months to follow (no official word yet on when it will be available in Canada).

The launch of iTunes Radio has been anticipated for several months, and will allow Apple to compete directly with other music streaming/subscription services like Rdio, Pandora and Spotify. The major competitive advantage for Apple, of course, is that iTunes Radio users will be able to directly download songs they like straight from iTunes, giving iTunes Radio a decided edge on Pandora et al.

Although there are no specific numbers available, it’s believed that Apple is offering the major labels and publishers a much better royalty rate as compared to Pandora and others (perhaps double that of Pandora), thanks to their superior advertising revenue. That may be fine for the labels and publishers, but it’s still cold comfort for the songwriters and artists, who will still continue to see microscopic financial returns for their creativity. Reports suggest that artists make as little as 0.0003 cents per stream through sites like Spotify, meaning that they would have to sell more than 4 MILLION streams per month just to make a liveable wage.

So many in the industry will, not surprisingly, continue to have a wait-and-see attitude towards sites like iTunes Rdio. It remains to be seen by all involved whether this is a step towards music industry salvation, or merely another stopgap, as the industry tries to conjure up a definitive answer to the problems posed by the continued availability of free music in our modern, digital era.

iTunes Radio will almost certainly provide more revenue for the major labels and publishers, at a time when it’s desperately needed. It provides an alternative to free, at a time when many young consumers still believe in free. But therein lies the problem. It’s an alternative to free…it’s not a solution to free. And that remains the elephant in the room, the question that will not go away. Not, how do we create an ‘alternative’ to free, but how do we create a solution to free?

Streaming and downloading, whether it be through iTunes or another service, certainly help fill the gap. But it’s somewhat like pumping air into a punctured tire over and over again; it may help you get from point A to B, but eventually you’re going to need to replace that tire. And that’s what the music business needs… it needs to replace that tire.