Ross Hayes Citrullo is a Producer, Mixer, Engineer and Emmy® nominated Re-Recording Mixer based out of Toronto, Canada. He graduated from Ryerson University with a BA specializing in audio production. Citrullo’s passion for music sprouted when he first picked up the guitar at age five. Just 15 years later in 2008, he launched RHC Music, a recording studio and production company based out of Toronto. He is also an instructor at the acclaimed Metalworks Institute, specializing in Pro Tools and Audio Post Production. At the beginning of his career, Citrullo had the privilege of working with a variety of indie and major label artists, including The Sheepdogs, AWOLNATION, Moneen and Monster Truck, doing live records for these bands. Since then, he has produced records for up and coming artists The Commoners, Stone River, Taming Sari, Levi Stephens and Spencer Mackenzie as well as engineering records for The Julian Taylor Band and Juno nominated Samantha Martin and the Delta Sugar, both signed to Gypsy Soul Records.

In 2017, Ross Produced a top 40 single on the ‘Canadian Active Rock Radio’ charts for The Commoners single Walkin’ South. In 2018 he produced the Jim Dan Dee record which climbed to #15 in Canada on the Blues and Roots charts. Ross’s most notable work was his role as Producer/Mixer/Engineer on the 102.1 The Edge Next Big Thing Winners JJ and the Pillars “Wolves”. The Single “The Wolves” was on regular rotation on Alternative Rock Radio across Canada, hitting #1 on 102.1 The Edge and was nominated for a CASBY award. He has also engineered and mixed the debut record for the roots band ByWater Call which was the #1 “Blues and Roots” record in Canada for 11 weeks and the #1 record in the UK for March 2020. Recently, Ross’ role as a Re-Recording mixer for projects with the Buffalo Bills has earned him a nomination for an EMMY® Award.

Citrullo encourages a creative outlook on music, and pushes the production’s sound palate to a new level of artistry. “My style as a music producer is to expand on an artist’s existing creativity through arrangement and the lyrical, rhythmic or melodic attributes of a song” Citrullo says. “My goal is to compliment what an artist brings to the table creatively, and build upon that.”

With a strong background in engineering and Pro Tools, Citrullo is efficient at running sessions, allowing artists the time and space to get creative, while managing studio time and budgets. “As a producer and engineer, you must be able to get levels and tones on an instrument quickly, to allow the artist’s ideas to flow freely and more creatively,” Citrullo says.

“Knowing how to effectively run a session to get the most out of a day and keep things stress-free is important to any project.”

Citrullo continues to work with nationally acclaimed, and up-and-coming artists across Canada and the USA. 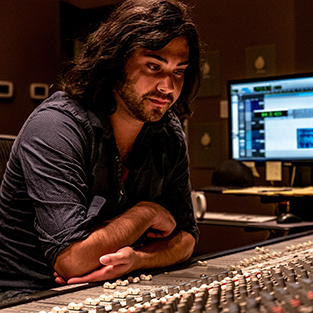 If you want to lead the orchestra, you have to turn your back on the audience.