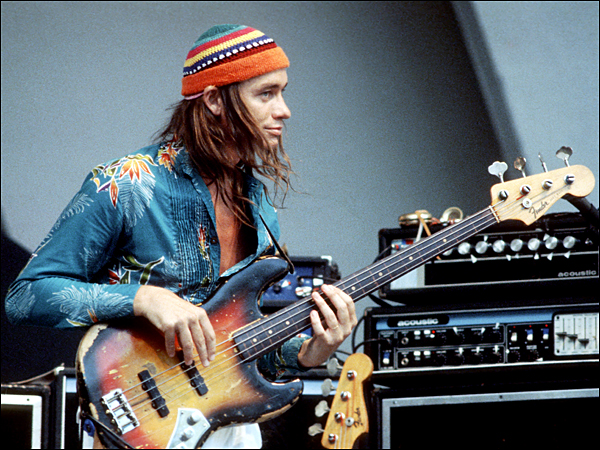 I often straddle the line between emulating my favorite musicians and ripping them off. I want to pay my respects and even quote some of the ‘greats’ but I certainly don’t want to be seen as a wannabe or accused of stealing my favorite players licks.

After more than two decades of playing bass, I truly believe that the best way to get your own voice on your instrument is to incorporate as many other voices (influences) into your playing as possible. The more players that have affected you, the more unique your voice will be.

I was involved in a discussion recently in which a prominent radio DJ was passionately ‘suggesting’ that there are currently no bands playing today that aren’t influenced in some small way by The Beatles.
When he unpacked his theory a little more, it really started to make sense to me. The Beatles were so huge and so influential in the infancy of rock and pop music that, even bands that can’t stand the Beatles music are still influenced by bands that have adopted certain styles or ideas from the Fab Four. If not their influences, then perhaps their ‘influences influences’ were copying aspects of the Beatles playing or songwriting. To take it even a step further, you could argue that to purposely try to sound different than the Beatles is to (ironically) be influenced by them.

So, if we were to adopt this theory and agree that all bands are in some way influences by these mop-topped Liverpudlians, what would we say makes U2‘s sound so characteristic? Is it the textured, delayed guitars? Bono‘s powerful tenor? Does Billie Joe Armstrong of Green Day separate their sound from other bands and create a unique voice by singing through his nose or is it because they’re a punky version of The Fab Three?

As far as my influences as a bassist go, I first got into Rush (bassist Geddy Lee), then Jaco Pastorius, then Stanley Clarke, Billy Sheehan, Marcus Miller, Gary Willis, Victor Wooten…
I don’t think I sound like any of these guys (although sometimes I wish I did), but I really want to be able to solo like Gary Willis, have Marcus’ tone, Victor’s pocket/feel, Geddy Lee’s independence for singing and playing, Billy’s stage presence… And to some degree I do have some degrees of these elements in my playing, simply because these are my influences. I listened to these guys for countless hours and spent days and weeks and years working on their techniques and styles.

If I hadn’t moved on from Rush, I’d be a very one dimensional player. Lots of guys get stuck on Jaco Pastorius because he’s left us so much to learn. Because Jaco is arguably the most influential bassist to date, it’s easy to sound like him, especially if you’re using his signature fretless sound and use of harmonics. To move away from sounding like a ‘Jaco-clone’, is to add several other players, styles and techniques to your musical arsenal.

I have a buddy who’s a great singer/songwriter/guitarist. Man, does he ever sound like John Mayer! That’s not a diss, although not fully a compliment either. John Mayer is a great singer, fantastic songwriter and an underrated guitarist. There are a lot worse people you could sound like. Admittedly a huge John Mayer fan, my friend simply has to start incorporating more musicians, songwriters, singers and guitarists into his circle of influence and he’ll soon be developing his own voice and distancing himself from sounding just like Mr. Mayer.

My professional career has mostly been comprised of playing with hundreds of different musicians and learning thousands of songs. Yes, thousands. Most of my ‘practice’ time was spend learning different songs in all sorts of styles and genres. I’ve played rock, pop, disco, country, jazz, smooth jazz, hip hop, latin, world music and blues… just to name a few! I’ve become very good at learning songs. I’ve also (over a long period of time) learned all sorts of basslines. I have become a better songwriter because I’ve played a tonne of great songs over the years. I’ve become a better singer too because I often sing lead or background vocals on a lot of my gigs.

The astounding view of musicality is that it’s much more esteemed to play ‘original’ music than to ‘cover’ other people’s music. Although I tend to agree, I’d like to suggest that those who write their own music have a lot more inspiration and tools to draw from if they have more influences and know more of ‘other people’s songs’. Songwriters are influenced by anything and everything. Most songs aren’t about ‘music’ just as most paintings aren’t about ‘art’, but having a strong understanding of how the greatest songs are created and played will give you a huge advantage when left to your own devices.

When it comes to your instrument, it’s really cool to explore and enjoy your instrument without conforming to any rules. Some of the coolest, most original techniques have been discovered this way. Having said that, when you start to break down all the techniques, licks and styles of your favorite players, you’ll soon have a repertoire of techniques that mesh with each other and start to become your own voice. You’ll start to copy certain styles you like from someone’s playing while leaving others. If you like a vocal line, learn it on your bass. If you like anything from any instrument, try to learn it. Use the limitations of your instrument to find new techniques of playing something that can’t be done with traditional technique.

Don’t worry about copying your favorite players. Learn what they’ve done and use it to further the influence of music. As musicians, we ‘give’ our music to our listeners. You’re not going to like everything you hear. Simply accept all music respectfully and take what you like, leave what you don’t like and share what you’ve gathered so that the process can repeat through the listeners who you’ve influenced.

** Author’s note: I have read hundreds of blogs on copycat bassists. I’ve taken some parts from several and left what I didn’t like. I added a pinch of salt and my own two cents and I hope you have enjoyed the final result. Please feel free to copy, borrow, steal and or manipulate any aspect of this blog.