For more than 300 years, the dominant role Classical music held in the entertainment universe was indisputable and unchallenged. Before the 20th century arrived, there was no way any other form of music could supplant Classical music as the most popular. Classical music, for generations, was held in the highest regard by all levels of society. Classical music was a valued education and if one possessed the skills to play an instrument of the orchestra it was an entrance pass to a level of society unseen by the most common of people. Any type of music, other than classical, was bourgeois – or – to some, even subhuman.

Then came the 20th century and modern technology. With the age of phonographs players, radios and jukeboxes upon society, music’s popularity with the common masses shifted drastically. People’s tastes in music were altered forever. Music now provided a new role in peoples’ lives in many ways it had never done before. For one thing, popular music now had a deeper personal connection with its’ listener, as they absorbed the pleasures that came with listening to music of your own choice in the comfort & privacy of your own home.

Its’ true that early 20th century Popular music suffered the same indignations and criticisms secular music always had, when held up against the purity, elegance and social acceptance of classical music. With regards to public consumption and sales of early-recorded music, Classical, Opera (and Gospel) always outsold the popular music of the peons. Then came the 1950s and Elvis Presley. 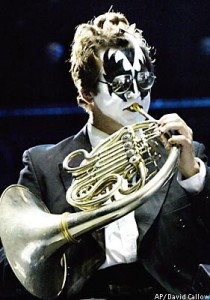 Almost overnight, the sales of popular recorded music, especially Rock n’ Roll, began to strip away at the bottom line once held in place by Classical music. Record labels began to notice that this ‘new’ popular music was not a fad and could reap extensive financial rewards. Then, at some point in the 1960s the two worlds of Classical and Popular music began to merge. A fine example of this might be The Beatles ‘Yesterday’ featuring a Barqoue inspired melody with a string quartet in place of Rickenbacker guitars and a steady back beat. In no time at all, artists such as Frank Zappa, Deep Purple, Alice Cooper, Kiss and genres like Progressive Rock groups, Disco, Soul were all adding elements of Classical music & instrumentation to their arrangements. Some groups, like Deep Purple going so far as to record a full album with the Royal Philharmonic Orchestra. Then by the 1980s, with Rock and other Popular music dominating the charts, Classical music began its’ own integration with the masses. Recordings emerged by The RPO and other world-renowned orchestras of Classical versions of music by popular artists such as Pink Floyd, Eagles, Alan Parsons and by the 1990s, artists from Elton John to Metallica to Kiss released critically acclaimed albums featuring themselves working alongside a Symphonic Orchestra. So, now that Classical music has reached this point, where does it go next?

Perhaps, the answer lies somewhere in the works on the new breed of classical musicians who continue to tap into the appeal of Popular music. Sure, there are still plenty of Symphonic renditions of popular artists & groups and some of these artists continue to employ Classical tactics to their own music, but is still enough to make you snap your fingers, shake your hip or band your head?

It is now. Meet ‘2 Cellos‘. Two young Croatian, classically trained musicians, who just happen to love Popular music. ‘Discovered’ by Elton John soon after uploading their cello-only cover of Michael Jacksons’ ‘Smooth Criminal’ in 2010, Elton was inspired enough to hire both musicians to bring a sense of youthful vibrancy to his music. Both musicians are good looking and have instant appeal with young female fans and their stage presence alone evaporates all notions of Classical sophistications. In essence, they have broken rules and taboos of the Classical music world that have been in place for centuries. They have made their version of Classical Music meets Popular Music more than interesting. It is inviting. It is engaging. With 2 albums to their credit, on the Sony Masterworks (Classical) label, their latest single & video was uploaded to youtube less than a month ago and has had over 17 million hits since.

Classical music might never again reach the formidable height of popularity it once commanded, but the respect for Classical Music should and will never diminish. Next time you meet a violinist or cellist, ask them if they want to jam with you. You may be surprised by more than just the music that is made. You may even be surprised at your own changing tastes and understanding of music. Embrace it when it does happen.