Since graduating from the Entertainment Business Management Program in 2007, Kristen Campbell has found herself immersed in the entertainment industry. After graduation, Kristen worked for the Institute itself before moving onto Propas Management Corporation/Propas International Rights Management where she currently works as the International Product Manager.

Since working with Steve Propas, Kristen has experienced the day to day dealings of the music business on an international scale. She quickly realized that there was a large amount of information to absorb and says she is still learning but is “becoming comfortable in my ‘work shoes’ after just one year of being hired on.” She has had the luxury of traveling to European conferences such as Popkomm (annually held in Germany) and Midem (annually held in Cannes, France – where she got to go to her first ever music awards show). Through her job Kristen has met “amazing people and experienced so many different cultures already!”

“This year Popkomm was cancelled and so we still went to Europe and visited a few of our various distribution partners in 4 different countries! These conventions are very important for our company because this is the equivalent of Canadian Music Week, it’s when all music veterans and industry personnel gather to meet and discuss the past, present and future. We arrange many meetings back to back for the 3-4 days the convention runs and don’t even have time to attend most of the panel discussions!”

In coordinating international press, Kristen is sent to different international venues to ensure things run smoothly. She manages distribution and licensing contracts between labels and distributors on a weekly basis and says that she was prepared for the legal “language” in these contracts from her Entertainment Agreements and Contracts classes with Paul Sanderson.

In the closing remarks of her review of the Institute Kristen added, “There is definitely something from each of my courses that I took at Metalworks that I still use on a daily basis. It is hard work and I work long hours, sometimes without breaks… Kind of like being in school again! I am thankful for my classes, for the instructors, the administrative staff, and for my classmates as everyone played a role in the decisions I made while in school and after graduating!” 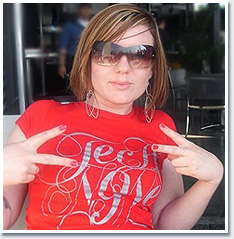